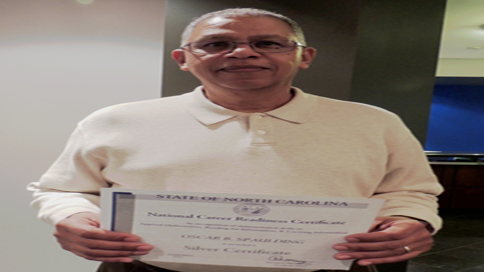 Posted at 14:55h in Success Story by Charlotte Works Staff

Oscar Spaulding earned the CRC and then earned a job at Piedmont Natural Gas.

Oscar Spaulding wanted to leave no stone unturned in his job search. After being laid off from his account manager position with a pharmaceutical distribution firm in 2012, he visited NCWorks Career Center – W. Morehead Street (WMS) the following day.

“If you’re laid off, you have no control over that. I didn’t expect it,” he says. “From day one, I said ‘this door has closed and another one will open. I’m not going to sit at home and feel sorry for myself. I’m going to get out every day and look for a job.’”

When Spaulding realized he lived closer to the Center at Executive Center Drive (ECD), it became his new “workplace.” He visited every day and took advantage of a variety of resources. He got to know the staff well, including Resource Associate Narissa Knight and Event Coordinator Brittenay Causieestko-Lee, who answered his questions and assisted him with submitting his resume to different postings.

Along with the helpful workshops, such as LinkedIn for Beginners, he attended, Spaulding also heard the buzz around the Center about the Career Readiness Certificate (CRC) and its preparation labs. He decided to go for it.

“The class to prepare for the CRC was pretty intense. I felt like I was back in college again,” laughs Spaulding. “If you think about it, any job posted on a job board probably has hundreds of people who reply to it. At least this way, I can put myself in a more favorable position.”

He attended every prep lab for six weeks and passed the certification test at a silver level. Now when he submitted his resume, Spaulding included this new achievement. That was the case when he saw a posting on Indeed.com for a customer service representative position with Piedmont Natural Gas. Two weeks later, Spaulding landed a phone interview and then moved on to a computer assessment.

“I thought the test was just for computer skills, but it turned out to be math and reading comprehension,” he recalls. “I was prepared thanks to the CRC. I would highly recommend anyone to go through with it.”

After an in-person interview, he was offered the position and began in January.

“I was determined to start 2016 employed. That was my goal, and fortunately, that turned out to be the case,” says Spaulding.

He admits that 100 percent of his job search was through NCWorks Career Centers, so he gives the staff a lot of credit for providing the resources that made his search successful.

“If you find yourself out of work, you pretty much need to utilize NCWorks Career Centers. That’s the first piece of advice I give anyone I run into who find themselves out of work,” notes Spaulding.

Get your CRC and get yourself a job just like Oscar Spaulding! Learn more about the job-readiness certification and how you can earn it for free at your NCWorks Charlotte Career Centers!