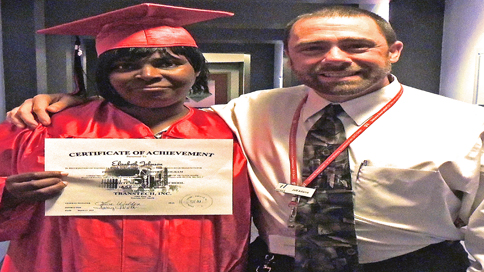 Posted at 15:51h in Success Story by Charlotte Works Staff

She visited this location in October 2014, applied for WIA training funds and received a grant to attend the same training program as Smith.

Johnson graduated on March 27, 2015. The program provided her not only with the necessary certification, but also with her commercial driver’s license. She’s now employed as a truck driver with U.S. Express Enterprises.

“I tell everybody about the WIA program and about NCWorks Career Centers,” Johnson says. “I spread the word!”

When Mykl Sandusky relocated to Charlotte in August 2014, he couldn’t have predicted that the position that brought him here would be eliminated in a matter of months, leaving him jobless in a new city, yet that’s precisely where he found himself in January 2015 when he first walked through the doors of the NCWorks Career Center at Forest Point Boulevard (FPB).

“Without exception, every [staff member] I encountered was supportive, respectful and understanding,” says Sandusky of his experience. “This provided me with the energy to continue on the days when I just wanted to stay in bed and forced me to realistically comprehend my situation, so that I not only resolved my unemployment, but took a career step that’s an excellent move for me and my family.”

On April 29, Sandusky began his new position as a portfolio architect with Lowe’s Home Improvement. He is particularly grateful to Joel Hirschman, employment consultant supervisor at FPB. “His demeanor towards me was key in maintaining a sense of dignity. The advice he gave me about how to locate opportunities and identify potential fits was beneficial,” Sandusky says. “My experience with NCWorks Career Centers is one of the reasons that I chose to stay here and call the area home. I’d recommend that anyone with any career concerns, be it unemployment, a desire to change professions or take the next step in their career, consider it as a strong resource.”

In 2012, Theresa Williams found herself in a career field that made her unhappy with too much or too little work, and not much support. She decided to switch gears and begin her job search.

While working a series of temporary positions, a friend referred Williams to Charlotte Works. In May 2013, she attended orientation and was referred to Tiann Shade, veteran employment and education specialist at Charlotte Bridge Home (a Charlotte Works partner agency), who critiqued her resume and provided resources. Williams also attended workshops that gave her tips on topics such as interviewing, using LinkedIn, and networking.

In April, Williams accepted a position with Real Floors, where she performs data entry and provides customer service. She notes that the support and encouragement that she received at Charlotte Works was part of her success.

“It took me a while to land the job I think I’m supposed to have, but Charlotte Works helped educate me about new hiring processes and interviewing methods that had taken shape since I last went through the job-search process,” Williams says.

Her advice to other job-seekers: be persistent and believe in yourself because you never know where you might land!