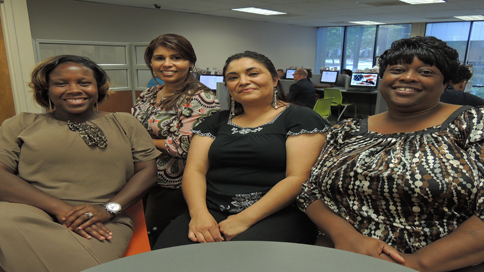 Posted at 15:34h in Job-Seeker by Charlotte Works Staff

Margarita Gonzalez Rocha is a tiny woman with long black hair, a soft voice and a core of steel.

Her story may have one of two effects on you: you’ll either want to just find her and hug her, or you may be inspired and motivated enough to start to create your own success story.

Margarita Gonzalez Rocha (second from right) is surrounded by her training team at the NCWorks Career Center – Executive Center Drive. From left is Career Coach Anastasia Knight; Claritza Abreu, intake specialist; and Pamela Jackson-Huffin, training coordinator. “I’m so appreciative of all the support from everyone at NCWorks!” says Gonzalez Rocha. “They stay with people till the end – they don’t just pay for training and leave us alone!”

Gonzalez Rocha came to the United States from Mexico in 2000, crossing the Texas border to work a variety of menial-labor jobs. While there, she married, but soon suffered at the hands of her husband.

She ran away to Columbus, Ohio. He followed, threatening her and her family with deportation if she didn’t come back to him. Not knowing that he didn’t actually have the power to send them back home and believing that she had no other options, Gonzalez Rocha returned to him.

They traveled to Charlotte, where she became pregnant. The violence increased. “He would scream at me, push me against the wall with his arm. He was not stupid enough to leave bruises on my face so he could get caught,” she says. “I didn’t leave because I didn’t have a place to go. I didn’t have family. I didn’t have money. And at the time, I didn’t speak English and I wasn’t legal.

“Then one day, he choked me in front of my daughter. I knew if I stayed, he would kill me. I made the decision to leave.”

Gonzalez Rocha and her daughter escaped and she took out a restraining order, which he violated twice before returning to Texas to avoid jail time.

After he left, she took whatever jobs she could find: washing dishes, construction, child care. She also learned that, as a victim of domestic violence, she could apply for an expedited visa and obtained both work and residency permits. Adriana Galvez Taylor, an attorney with the Latin American Coalition (a Charlotte Works’ SNAP site), assisted with the paperwork and other resources.

At the now-defunct Q Foundation, Gonzalez Rocha met Claritza Abreu, now an intake specialist at the NCWorks Career Center – Executive Center Drive, who advised her that the first step to a new life was to earn her GED (General Educational Development) certificate.

Four classes into the test preparation, the foundation closed. Gonzalez Rocha went to Central Piedmont Community College. After only one month, she passed the exam.

“I was happy, but I wanted to do something else,” she says. “I didn’t want to just have a paper on the wall.”

She enrolled in English-as-a-second-language (ESL) classes at the Charlotte Mecklenburg Library. Finding just one class to be too slow, she attended a second – all while working two jobs and caring for two children.

When she’d completed the library’s ESL courses, she checked out books and a dictionary to use at home. As she read, she wrote down for later study the words she didn’t understand.

She made her way to the NCWorks Career Center – W. Morehead Street after being laid off from her job as a dishwasher. She reconnected with Abreu, who asked what she wanted to do at work. Gonzalez Rocha told her, “anything.”

“At first I said, ‘no, this is not for me.’ But when I started to work with people, I was feeling so excited because I could help them and because they had confidence in me,” says Gonzalez Rocha. “When I got the opportunity to get into training with Claritza, it was the best opportunity to do what I needed to do.”

She qualified for a program, passed the exam and got the certification. But Gonzalez Rocha wasn’t satisfied. “Every time I completed something, I was feeling like I can do more.”

Anastasia Knight, then a training coordinator (now a career coach), directed her to a medical assistant (CMA) certification – a more intense program of study and accreditation process. Despite having nearly mastered English, Gonzalez Rocha worried that the language barrier would hinder her progress, but Knight, Abreu and others encouraged her to try.

She finished the coursework and passed the initial CMA exam. Currently, she’s working at Bethesda Health Center, a free clinic for low-income citizens, to complete the required 375 hours of clinical time to sit for the state exam. Gonzalez Rocha anticipates accomplishing that by fall, and hopes to gain a full-time position at the clinic.

“Through all that happened in my life, I feel like it was a learning, not a punishment. I don’t like to feel like a victim,” Gonzalez Rocha says. “I’m so proud of myself. In three years, I made all these things happen: I got my GED, I got my citizenship. I want to be a person who doesn’t have any doubt. I’ve improved a lot, but I can still learn more! Everyone has an opportunity to improve and be someone in their life. If they work and do their best, they can get whatever they want.”