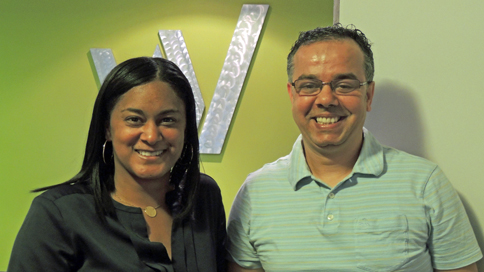 Posted at 15:40h in Job-Seeker by Charlotte Works Staff

Is there really a difference in how a medical professional draws blood or administers an EKG from one state to another?

Training Coordinator Tasha Williamson and Maati Elarfji celebrate his approval to enter WIA-funded classroom training to be certified to work as a nurse technician in North Carolina. Elarfji’s previously held certifications didn’t transfer to the state from Massachusetts, so he’s using WIA funds to get back to work in the local healthcare system as quickly as possible.

Ask Maati Elarfji, who moved to Charlotte from Massachusetts in January after losing his job as a nurse technician when the hospital at which he’d worked since 2003 closed its doors.

“When I came here, I was thinking I could just go to work, because in Massachusetts, I had certifications so you could work in any hospital,” he says. “It’s hard, because I’ve never had any experience with lay-offs.”

His family has a house in the area and was planning to move this summer anyway to escape the Northeast’s brutal winters, but Elarfji’s unexpected unemployment accelerated those plans.

He first visited the NCWorks Career Center at Executive Center Drive and then came to the Center at W. Morehead Street to take advantage of a broader range of workshops.

Elarfji learned about career centers before he left Massachusetts; staff from local centers served the workers affected by the hospital closure by providing interviewing and resume development guidance. So he immediately sought a similar service upon his arrival in Charlotte.

He currently draws unemployment benefits while continuing to apply for jobs for which he is rejected because he’s not credentialed in North Carolina. “It’s very hard,” says Elarfji. “I have 12 years’ experience and I go to a new city and have to get certified all over again.”

“Mr. Elarfji’s situation is similar to many clients who move from another state with a credential in hand that it is not recognized in North Carolina. It makes the employment scope look dim, but this small setback didn’t stop Mr. Elarfji from getting the training he needs,” says Williamson. “Mr. Elarfji will be working with one of the healthcare networks in no time.”

“When I met with Tasha, she asked me, ‘What do you want to do?’ and I told her this is what I used to do and I just need to get certified,” he says. “I said to myself, ‘What do I need to do to start something new?’ I decided to get certified in what I know.”

In Massachusetts, Elarfji was planning a career in radiology; he put those plans on hold when he lost his job. “I said, ‘Do I need to go now? No – I’m laid off. I need to get back on track now and go back later,’” he says. “Healthcare is a good field. You can get certified and get a job.”

The day Elarfji came to the Career Center to be interviewed for this newsletter, he learned that he’d been approved for a training grant to attend Chosen Healthcare Institute in Charlotte. He and Williamson researched providers that offer a compendium of courses and certifications so he could shorten his time in training and get back to work faster.

Elarfji’s coursework begins in June; when he finishes in October or November, he will have earned certifications as a nurse aide and EKG and medication technician and in CPR/first aid. Following a training period, he hopes to find a position with one of the area’s large healthcare systems.

Learn more about how WIA (Workforce Investment Act) funding could help you reach your career goals!