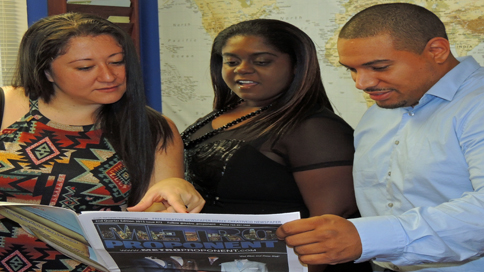 Posted at 18:48h in Training by Charlotte Works Staff

Employers, how many of your employees could you (would you?) describe as a “blessing?”

Potential employees, how many of you would love to be described by your employer that way?

That’s how NCWorks clients Andra Summey and Kim Weatherell describe each other. And both credit an On-The-Job Training (OJT) Grant for bringing them together in what Weatherell calls “a beautiful marriage.”

Summey had been working in the mental health field for four years when she was laid off in May of 2014.

“When you hold steady employment for years and all of a sudden it’s gone, your world comes crashing down,” she says. “I was doing everything I could to claw may way out of nothing.”

She networked hard, going to community events and job fairs and even asking for prayers for work at church. (“You never know who’s looking and listening,” notes Summey.)

She used the packet of job-search information she used to share with her mental health clients for herself.

She searched online and spent time tailoring her resume to fit different openings she found.

“You have to be versatile, you have to broaden your horizons and be open to different things,” Summey says, noting that she first looked only for mental health opportunities, but soon expanded her search as she worried about being laid off again due to changes in Medicaid and Medicare.

During an online search for resources at the Charlotte Mecklenburg Library, she discovered NCWorks Online. Subsequent research led her to the OJT Grant program and an information session at the NCWorks Career Center at W. Morehead Street.

Shortly after, Summey found a listing for the general manager of the Metro Proponent Foundation on NCWorks Online.

“I couldn’t believe they called me back!” she marvels. “It’s the first time that not having any experience didn’t hold me back!”

She started in May.

Weatherell, who’s steadily built a mini media empire in Charlotte since first publishing the monthly “Metro Proponent” in 2008 (she’s since expanded to online and television, and is currently exploring music and entertainment), needed someone to legitimize the foundation she’d established in 2010.

“I really wanted the Metro Proponent Foundation to be credible,” she says. “We didn’t have a 501(c)(3) because we’d always partnered with another nonprofit. It wasn’t difficult, it was just time-consuming. But Andra’s a self-starter – I told her what I needed and she was savvy enough to do the research and tell me what I needed to get it set up and get going. She’s good at all the details, and I’m not.”

Now that the foundation is “official,” Summey’s attention – and duties – have shifted to programming and fundraising. She’s working to establish partnerships with the Charlotte Hornets and Charlotte-Mecklenburg Schools and plan events to raise money to support the foundation’s causes: children who are victims of domestic violence; breast cancer; and multiple sclerosis.

She also maintains Metro Proponent’s three websites and manages paperwork, budgeting and production for the newspaper.

“I’ve learned a lot that I didn’t know – I’m like a fish out of water, flapping around,” says Summey. “But now I have knowledge to do things on my own to help myself: I can build a website. I have contacts I didn’t have before. I know a lot about nonprofits. I would have learned none of these things [working] in mental health. If you’re looking for a change, the OJT program is definitely the way to go!”

Weatherell learned about the program from a friend and business associate. Neither she nor Summey knew what to expect – from the program, or each other.

“Everybody wants work of some sort, to make additional income,” says Weatherell. “I didn’t know she’d be so charismatic and funny. She’s like family. It’s been a blessing on both parts – Metro Proponent has added value to her life as she’s added extreme value to ours.”

“I was just happy to get a paycheck! I was hoping for something steady and reliable, and I got it,” Summey adds. “I got something I look forward to going to everyday. It changed my life. I went from my world crashing down to back on my feet. Without the grant, she couldn’t have hired me and I’d still be unemployed. It’s broadened my horizons and changed the total course of my life. Who knew a grant could do that?”

Interested in changing your life or business with an On-The-Job Training Grant? Get the details and contact Jim Korth, business services project manager, at 704.390.7093.