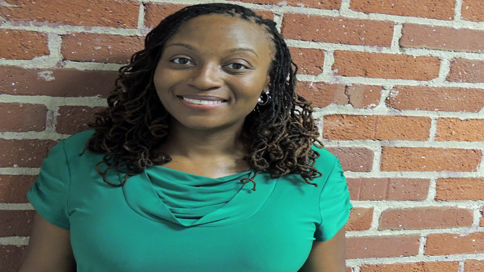 Posted at 15:24h in Volunteers by Charlotte Works Staff

You know how some people change the energy in the room they enter? Some change it for the worse: they make you frenetic or anxious or furious.

And some people shift your outlook in a completely different direction with gentleness, calmness and an inherent caring that just infuse the space with positivity.

Volunteer Orientation Leader Patiya Freely is one of the latter.

Just a short while into a conversation with her, you can tell her calming nature comes from deep within; you’ll also quickly learn that her story resonates with many clients in her orientation sessions, immediately making her more accessible to people at a vulnerable time in their lives:

“I relocated to Charlotte from Washington, D.C., in June of 2014 and the job ended six months later. They recruited me and paid to relocate me and then they lost funding,” Freely says. “So when clients come in, I tell them, ‘Listen, I understand about circumstances being out of your control. Things went down, decisions were made that deeply impacted you. I get a lot of nods.”

When her small nonprofit employer laid her off, she went online to answer the question, “What are my options to get back to work in Charlotte?” Freely found NCWorks Online and was amazed at its resources.

She came to the NCWorks Career Center at W. Morehead Street in July 2014 and attended workshops including How to Identify Yourself, LinkedIn 101 and the Take-Charge Tuesdays series. She also explored the potential of WIA (Workforce Investment Act) funding for training, but realized she wasn’t a good fit for that program.

Freely began volunteering earlier this year at the urging of Stacey Henderson, talent engagement strategist. “You know they have slide [on volunteering] in the orientation presentation,” she says. “I said, ‘I have this interesting story and I don’t have a fear of public speaking so I can help.’”

Her favorite part of volunteering is “seeing people get a renewed sense of hope. You can see people who have been downtrodden in their posture. I tell them, ‘You can’t dwell in the circumstance. You’re allowed to grieve – let’s express that, let’s work through it, but then we have to move on,’” says Freely. “And throughout orientation, you can see it in their body language: they sit up, they’re engaged. They realize it’s not too late. Life deals some heavy, unexpected blows, but they’re energized and ready to get back to life by the end of the session.”

She says her volunteer work at the Career Center is solidifying her resolve to find a position in Charlotte’s philanthropic community. “It’s reinforcing what I’m supposed to do, my need to acknowledge the personhood of everyone, my need to deliver quality service,” she says.

Her background is in nonprofit program management and grant-writing, and Freely would like to work for a foundation and pursue her passion for child welfare.

She thinks the Career Center services and staff are helping her get there: as a result of a contact she made at W. Morehead Street, she landed a part-time position as a skills assessment specialist at Central Piedmont Community College, where she works with adults who are pursuing a high school diploma or General Equivalency Diploma (GED).

Freely says Henderson and Career Coaches Shemia Williams and Anastasia Knight have been particularly helpful with reshaping her resume in a positive, professional way that better presents her varied experience.

She’s also working to build a strong professional network in Charlotte, going on “lots of coffee networking meetings,” says Freely. “I need to make connections in this city. Chris Braswell [Take-Charge Tuesdays instructor] said you need to ask, ‘Who else knows what you do?’ and that really struck me. So I never sit down with people to ask for a job. I ask about their work experiences in philanthropy in Charlotte so I can learn about the culture and environment I seek to transition into.”

Want to volunteer at one of Charlotte’s three NCWorks Career Centers? Check out the details and let us know!