What jobs are at risk of automation in Charlotte?

Home › What jobs are at risk of automation in Charlotte?

18 Jan What jobs are at risk of automation in Charlotte?

Posted at 12:29h in Careers, Data by Alyssa Brown

Automation is a hot topic as robots and technology evolve to fulfill everyday tasks. Society frequently associates automation with manufacturing-related jobs, and rightly so. Most assembly line positions have been replaced by machines that place products and parts on a conveyor belt to move across a factory. Though this is the most common example of automation, there are other industries and occupations that have been phased out because technology evolved to take their place. Some cashiers in grocery stores were swapped for self-checkout machines. Drones are replacing the need for local delivery drivers. Several companies including Google and Uber are exploring self-driving cars, which could displace commercial truck and taxi drivers.

Historically we’ve seen automation take over blue-collar jobs. Today, the focus remains on these typically low-skilled positions. But, many white-collar positions are also at risk.

What does “risk” mean?

An Oxford University study examined more than 700 U.S. occupations and discovered that 47 percent of jobs are at risk of automation. The mere mention of automation is enough to send people into a frenzy over whether robots will take over the world. Truthfully, automation is a slow process and the development of technology doesn’t eliminate the need for a specific occupation. For this article, risk means that technology is anticipated to replace certain aspects of a job. Let’s use accountants as an example. The need for accountants won’t disappear, but software will replace traditional accounting systems that require multiple positions to analyze information. What used to take an accountant three days to calculate, may now only take three hours, thanks to technology.

Possible regulations can also play a role in the automation discussion. Previously, regulations weren’t considered when classifying jobs as high risk. Self-driving cars may become a reality, but if the federal government bans their use, delivery drivers will still be in high demand.

Which Charlotte jobs are at risk for automation?

Locally, an unsurprising trend shows that many low-wage, low-skilled jobs are considered high risk of automation. Positions like short-order cooks, servers and baristas make the list within the hospitality industry. Retail and cashier positions will fade away as they get replaced by self-checkout machines and online shopping. Jobs listed as “medium risk” include maids and housekeepers, dishwashers and bartenders.

Medium-skilled positions also face a high risk of automation, particularly in the office setting. Employers will have a decreased demand for administrative workers, executive assistants and receptionists as calendar scheduling and automated phone prompt technology becomes more available. Software that helps human resources assistants and billing clerks is rapidly evolving and will also lead to decreased demand for these positions.

A large concentration of finance and insurance sector jobs are at risk in the Charlotte area. These aren’t only high-skilled and well-paying jobs – like insurance appraisers, sales agents and examiners – but are a cornerstone of our local workforce. Many insurance companies are investing in technology that allows customers to buy, manage and file insurance claims online or through an app. In turn, the demand for people to manage this process decreases. Software is also accomplishing tasks faster and more accurate for positions in the accounting field including accountants, auditors and bookkeepers.

What jobs are safe from automation?

Software and robots often don’t possess critical thinking, compassion and decision-making abilities. Jobs that require these skills will be safe from automation. Many of these jobs are managerial positions and will remain in high demand like operations managers, human resources managers, marketing managers, food service managers, chefs and hotel managers. 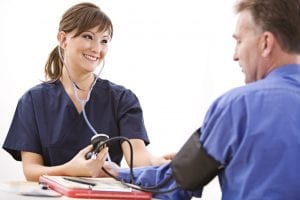 Notably, several occupations in the health care and information technology sectors are also safe from automation. The demand for all types of physicians, along with the need for registered nurses, nursing assistants, mental health counselors and lab technicians will remain high because they’re positions that require physical interaction, decision-making and compassion. Understandably, IT jobs are safe from automation because these positions are developing the automation tools. Companies are increasingly investing in IT positions like web and software developers, computer programmers and information security analysts to not only develop new technological tools, but to maintain and repair them.

Where do we go from here?

It’s critical that communities proactively address the threat of automation. A Governing report concluded that metro areas with a high concentration of technology jobs are less vulnerable to automation. It analyzed metro areas across the country and identified the percentage of the workforce at risk of automation. The report found that 58.8 percent of Charlotte are jobs are potentially automatable. In comparison, 55.9 percent of Raleigh’s workforce is vulnerable to automation.

Many of these jobs identified as high risk will be around for years but with shifted job duties. Insurance sales agents may shift to insurance database management managers. Accountants may need to develop software analysis skills as part of their functional roles. To address automation risk, employers must work with K-12 and higher education partners along with local workforce boards to develop curriculum that adequately teaches technology skills. Employers must also stay mindful of their technological investments and ensure that current employees have ample training opportunities to learn new skills required of these ever-changing positions.

View the automation risk of 170 common jobs found in the Charlotte metro area.

Sign up for our newsletter to stay in the loop on local workforce initiatives!