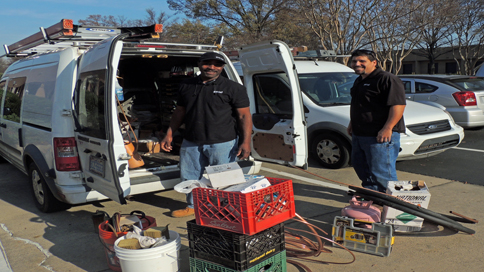 Posted at 22:20h in Success Story by Charlotte Works Staff

Timothy Longmire had been unemployed for about six months when he pulled up next to David Roman’s truck in the parking lot of the South Boulevard Lowe’s Home Improvement store.

He was just on a personal errand, but saw Roman’s heating and air conditioning tools in the back of the truck. So he pulled out his resume and a brochure describing NCWorks’ On-The-Job Training Grant program (OJT) and introduced himself.

Timothy Longmire (L) and David Roman organize equipment in a Commercial Equipment Repairs truck. Longmire is one month into a six-month On-The-Job Training Grant with the company. He approached business-owner Roman in a parking lot. “You always want to be prepared. I had my resume and OJT pamphlet in the truck and kept it with me daily because you never know who you’re going to run into,” Longmire says.

“I’m an opportunist, and I said, ‘this is my opportunity,’” says Longmire. “I told him I’d taken classes but had no experience and asked, ‘are you hiring at your company?’ I didn’t know he was the owner.”

“I was a little leery,” Roman admits. “But he clearly identified what he was doing, what he was looking for. He was well-mannered, well-dressed and had a decent truck. Those sound like little things, but they’re important.”

The two spoke for about 15 minutes, the conversation ending with Roman taking Longmire’s resume and brochure and giving him his card.

A former Marine, Roman had taught job-search techniques to fellow servicemen leaving the corps, and was impressed with Longmire’s presentation and persistence. “I knew if he had the intelligence to get this right, he could learn the business. He was honest about his education level and training, which is paramount. He did the proper things with the call-backs at the proper time, once a week. Tim could write the book on this,” says Roman.

Longmire credits NCWorks with preparing him for the search. He learned about us through the Urban League of Central Carolinas. “I saw all the resources that were available and got excited. I took advantage of the resume coaching, the OJT, everything,” he says.

He’d applied for numerous positions – and approached four other people in the same way he met Roman – but wasn’t getting responses. “I went through the OJT orientation and I said, ‘this is it. This is my ticket.’ It does work, as long as an individual wants work. You just have to want it and use it,” says Longmire. “Had it not been for this program, it would have been lengthier for me to break in. The OJT program is the link.”

While his training will last a full year, the OJT Grant from NCWorks will cover 75 percent of Longmire’s salary for the first six months.

The men are pleased with both each other and the situation at the 30-day mark.

“Tim’s spun up quickly. He’s already helping,” says Roman, who plans to make Longmire a full apprentice. “And this grant helps a small business like mine because 75 percent of the training is ridiculous!”

“The training has been remarkable,” Longmire says. “I’ve had exposure to different units, been on rooftops, done installations. It’s coming really fast, but it’s allowing me to connect the theory with the application.”

Roman is thinking bigger. He wants to partner with NCWorks Charlotte to develop a feeder training program that would benefit not just his own business, but other small companies. “I conceded a year ago that I have to be more of a training school than a company,” he says. “If I can train guys, I can help guys.”

He notes that a skills and knowledge gap in his industry is getting bigger. “With retirement, there are too many people going out and not enough coming in. And there’s no apprenticeship in the mechanical, electrical and plumbing trades, so there’s no one in those lower levels that lead to jobs. This is a job opportunity that leads to a career that will keep food on your table.”

If you’re an employer, learn more about how an On-The-Job (OJT) Training Grant can help your company.

If you’re a job-seeker, find out how the OJT Grant program can boost your re-employment campaign by registering for an OJT information session on NCWorks Online.