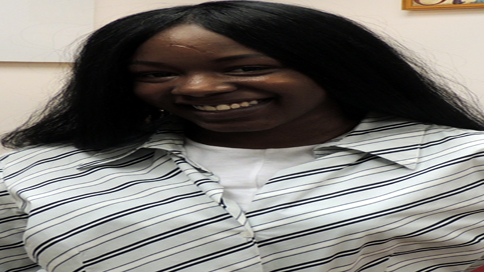 Posted at 15:06h in Youth by Charlotte Works Staff

Twenty-year-old Shavona Mann wears a bright smile, knowing that she’s on track to achieve her goals. She wears that smile knowing the obstacles she’s overcome and the challenges that she continues to face. Her journey shows that anything is possible with focus and a support system.

Shavona Mann was determined to earn her GED certificate and make it to college despite being forced to leave high school to care for her 10 younger siblings.

“I was in a bad place when I came here. I just wanted to do something other than what I was doing,” she explains.

That “bad place” included being left to care for 10 younger siblings after their mother was arrested and ordered to serve seven months in jail. Mann tried to make ends meet with her paycheck, but it wasn’t enough and her siblings were taken into foster care. When their home was foreclosed on, a friend offered her a place to sleep.

“My motivation was not sleeping on the floor anymore,” she says. “I felt like ‘enough is enough.’ That was all the motivation I really needed.”

At that point, Mann set her sights on college.

“I thought college would be my haven, so I put all of my effort into trying to get there,” she shares.

Since she left high school during her junior year, she needed to earn her GED certificate. Although Mann studied hard, she couldn’t help but cry when she learned that she’d failed the math portion of the test (she was within mere points of a passing score). A week later, she learned that the requirements had changed and her score was valid after all. She had completed the courses within a month. This time, her tears were tears of joy!

With no hesitation, Mann began her certified nursing assistant (CNA) program at Serenity Nurse Aide Academy, which she also completed within a month, all while holding a part-time job working overnight shifts at McDonald’s.

Jessie Williams, case manager at ResCare, is proud of how far Mann has come. He knew that she’s a smart girl who just needed some direction.

“I knew the obstacles she had to face when she came in. I think where she comes from really defines her success. She downplays it a little bit,” he says. “Shavona was left responsible to take care of siblings, so she had to surrender some of her high-school responsibilities. When she came in, she was at a point where she needed some direction but managed to lift herself up.”

Mann is waiting to hear about her acceptance into Herkimer College in New York, where she hopes to start in the fall to study criminal justice or crime and information analysis.

“I was interested because my favorite shows are ‘Law and Order: Special Victims Unit’ and ‘CSI: Crime Scene Investigation,’” she laughs.

She recognizes that her case managers go above and beyond to keep her on the right track. “They’re always around to help. It’s shocking sometimes,” she says. “Even when I disappear, they’ll call me to track me down and it helps a lot that they care. I appreciate it.”

Mann’s friends also see the change in her, so recommending the youth program to them isn’t too hard a push.

“I brought my best friend. He wants to get his CNA, too,” she says. “He saw firsthand what the program did for me so he knows that it works. Hopefully, it’ll go the same way for him.”

Even with her busy schedule, Mann makes a priority of spending time with her brothers and sisters bi-weekly at a sibling visit.

It still surprises her to think back how different life was just a few months ago. “It really is possible to do what seems impossible. It might be hard and, at the time, you don’t want to do it. I don’t know how I did it. I just sucked it up and told myself that this is what I need to get what I want,” she concludes.