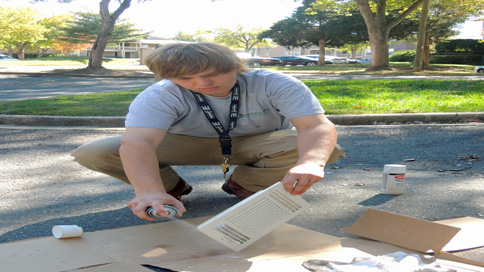 Posted at 21:48h in Youth by Charlotte Works Staff

Galo Saladin is not shy.

He’s not shy about telling you that he only got into maintenance work for the money. (He really wants to go into horticulture and dreams of working his own organic farm one day.)

He’s not shy about telling you about his past as “not-the-greatest-kid in high school.” (“I’m not gonna lie,” he says. “I’ve been in jail.”)

He’s not shy about telling you he was the only white person in his Urban League-sponsored HVAC (heating, ventilation and air conditioning) class. (He appreciates the acceptance and support he felt from all the agencies that have helped get him on the right path.)

What Saladin is is determined to stay on that path. “Now I have a job, a truck. I didn’t realize that getting an education or a trade is so important,” the 20-year-old says of his younger days.

After graduating high school and moving from Concord to Charlotte with his mother and stepfather, who told him he had to get a job, start volunteering or otherwise find something useful to do, he and a friend went to the South Boulevard JobLink and learned about Charlotte Works’ Youth Works program with ResCare Workforce Services. When he’d completed ResCare’s two-week work-readiness program, he enrolled in a forklift-driving course. Saladin looked for work, but even with the certification, couldn’t find a job that didn’t require at least three years of experience.

ResCare staff connected him to a position at Goodwill Industries; he left after five months, finding that the salary wasn’t fully paying his bills.

Saladin spent a few months in his native New York state, then returned to Charlotte and applied for “mediocre” jobs at local restaurants. He was frustrated.

One day, his mother was researching options for him and learned about an HVAC certification offered by the Urban League of Central Carolinas. Further exploration revealed that he was still eligible for funding through Youth Works, so in January 2014, Saladin enrolled in the four-month class. He graduated at the top of his class.

His stepfather worked for temp agency BG Staffing and encouraged him to submit a resume; Saladin was offered a maintenance position the same day he sent it in.

He’s now working at The Forest at Chasewood apartments, his fourth property. All have offered him a permanent staff position, but Saladin enjoys the experience he gets from working with different people in different situations.

“He’s a phenomenal worker – I thought he was awesome from Day One!” says Lashaune Tisdale, senior community manager for Eller Residential Living, the property’s management company. “He manages projects completely on his own and asks for additional tasks we need completed. Galo has an incredible work ethic, especially for someone his age. We’ve had several placements through the temp agency and hands down, he’s the best one!”

Saladin is quick to credit the help he’s received. “I wouldn’t be where I am today without Charlotte Works, ResCare and the Urban League,” he says. “Some of the kids in the apartment complex have asked about jobs, and I recommend them to these programs. They don’t discriminate – you could have felonies, you could be a straight-A student. You’re going to be accepted and not have to worry about being poor, having something going on at home, whatever. They’re great programs.”