Workforce by the Numbers: Growth amid uncertainty

Home › Workforce by the Numbers: Growth amid uncertainty 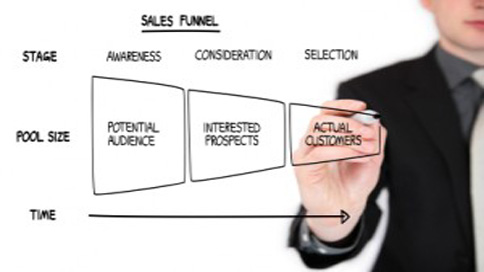 19 Dec Workforce by the Numbers: Growth amid uncertainty

Posted at 15:48h in Careers by Charlotte Works Staff

Charlotte Works is pleased to continue Workforce By The Numbers, spotlighting workforce research from around the region. Data and analysis are provided through our partnership with the Charlotte Chamber.

As the U.S. economic recovery continues gradually to build momentum, North Carolina and Charlotte are leading the charge. The region’s unemployment rate has fallen nearly two percent from this time last year to 5.4 percent. This tightening of the labor market should lead to much needed wage growth in 2015.

Economic growth does not occur by accident. North Carolina is among the most competitive states for business, ranked the third-best state by Forbes, Site Selection and Development Counselors International.

Charlotte is doing its part, ranking as the sixth-fastest growing metro by GDP (gross domestic product) and second in population growth since 2000.

Growth has defined the region in 2014 in terms of jobs, expansions/relocations and population. The region added 32,820 jobs, capturing 27 percent of the 121,050 jobs in the state.

Retail salespeople encompass 15 percent of the total employment in the trade, transportation and utilities sector, with 36,972 jobs paying $10.51 per hour. There are other opportunities within the sector: for example, wholesale and manufacturing sales representatives added 660 new positions paying $25.17 per hour. And with seven percent growth (713 jobs paying $17.58 per hour), truck and tractor-trailer drivers is an additional occupation in the sector with growth potential. 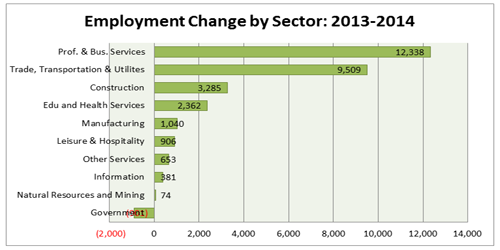 Year-to-date building permits totaled more than 15,000 in Mecklenburg County, up from 12,000 this time last year. This up-tick in construction activity has resulted in the sector adding 3,285 jobs this year, a trend forecast to continue into 2015.

The region’s business climate attracts a wide range of industries and facility types. A major win for the region was the relocation of Sealed Air Corporation’s headquarters operations from New Jersey, adding 1,262 jobs paying an average salary of $119,000 annually. AvidXchange, an automated invoicing bill-payment company is adding 630 jobs in Charlotte. Information technology companies that announced expansions or relocations include RingCentral, Cognizant and Velocity, adding a total of 400 new jobs.

Employment and population growth work in tandem, spawning future economic development as we attract the best and brightest talent from around the country. Our region possesses what other parts of the county strive to attain: a relatively low cost of living when compared to other major metropolitan areas, excellent amenities and a unique culture. Money ranked Charlotte as the best big-city bargain, while Forbes ranked Charlotte the second-best city for recent college graduates.

The proof is in the numbers: our region added 32,678 citizens, capturing 27 percent of the 120,577 people who have moved to North Carolina. Our growth outpaces our peer regions including Atlanta, Miami and Seattle, and the United States as a whole.

According to forecasts provided by EMSI, the fastest-growing occupation next year (outside of retail) is real estate agents, expected to add 1,099 jobs in the region.

The region’s economy has more than recovered the jobs lost from the economic downturn and emerged stronger and more diversified. The future is bright in 2015 for Charlotte and surrounding counties.

Paul E. Hendershot serves as director of research at the Charlotte Chamber of Commerce. Prior to joining the Charlotte Chamber team, he worked as manager of business development in the commercial real estate department at Dallas/Fort Worth International Airport (DFW) and spent four years as the research director at the Dallas Regional Chamber. During his tenure with the Chamber, Hendershot completed more than 100 unique economic development projects including Comerica, AT&T, Gulfstream, Arbitron, Capital One and Research in Motion. He is also founder and chief economist of Hendershot Economics, where he defined the life sciences industry for BIOCOM, among other projects in the Greater San Diego region.