Workforce by the Numbers: Charlotte economy projected to grow in 2016

Home › Workforce by the Numbers: Charlotte economy projected to grow in 2016 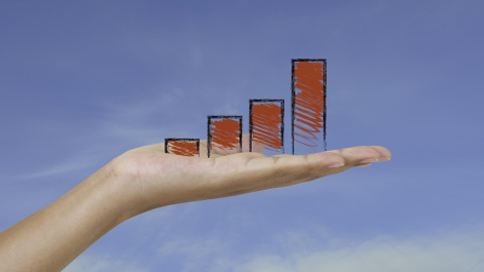 16 Jan Workforce by the Numbers: Charlotte economy projected to grow in 2016

Posted at 16:36h in Planning by Charlotte Works Staff

Workforce by the Numbers is our monthly look at the statistics and data that are shaping the workforce in the Charlotte region.

It comes as no surprise to Charlotte residents that the city and the surrounding areas are experiencing a period of tremendous growth: a picture of the Charlotte skyline from even 15 years ago looks virtually nothing like the skyline today. Construction is booming, the number of people moving to Charlotte continues to rise and the area has experienced a persistent rise in wages and jobs since the recession. In fact, Mecklenburg County has added 100,000 jobs since the recession’s low in 2010; as of the third quarter of 2015, there were more than 632,000 jobs in the county. The chart below shows the growth in total number of jobs between 2010 and 2015: 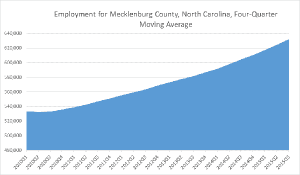 With these new jobs come higher wages than ever before. The current average wage for Mecklenburg County jobs is $62,549, up from $53,831 in 2010. The average annual salary for the county is higher than both the state of North Carolina ($46,203) and the United States as a whole ($52,791). The chart below shows the average annual wage in the county between 2010 and 2015 across all occupations: 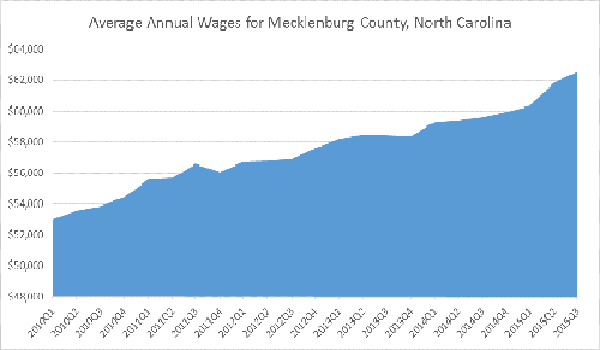 Charlotte business leaders voiced their excitement for the 2016 economic outlook at the Charlotte Chamber’s annual economic outlook conference on Dec. 18. Area executives discussed their optimism for the local economy and indicators of continued economic growth in the area including low energy prices; local corporate mergers; the housing market recovery; increases in the healthcare industry in response to the Affordable Care Act; and increases in consumer spending, wages and job growth.

Speakers at the Charlotte Regional Partnerships’ economic outlook breakfast on Jan. 6 echoed sentiments of regional growth expressed during the Chamber event, but noted the hardships Charlotte faces that may stunt the city’s growth potential including infrastructure, upward economic mobility and the rural-urban divide.

The continuous influx of residents to the area will require Charlotte to make ongoing improvements to roadways, utility infrastructure and public transportation. The economic mobility crisis means that not all Charlotte residents will be able to experience the city’s economic growth. And the slow growth rate of many rural areas surrounding Charlotte should be a concern for area leaders.

The panelists also discussed workforce development trends and the need to up-skill current residents to compete for the high-wage, high-demand jobs requiring advanced education that attract many people to relocate to the area.

UNC Charlotte economist John Connaughton predicted in his Dec. 8 economic forecast that the state of North Carolina will experience modest growth for 2016, adding 111,000 new stable jobs. He predicted the sectors to experience the most growth in 2016 to be business and professional services, information and construction. Other strong sectors in Charlotte include finance, real estate and insurance, healthcare and advanced manufacturing. Industries projected to experience decline are agriculture and mining.

The same researchers also released a report on the best and worst cities to start a career; Charlotte ranked 29th out of 150 in that report, behind Raleigh (23) but ahead of Durham (30).

Overall, Charlotte residents should continue to be excited for anticipated growth in 2016. Job-seekers should be aware of the jobs available in sectors expected to continue to grow such as information, construction and healthcare.

Register on NCWorks Online or visit any of our NCWorks Career Centers  for more resources and information on landing your dream job in 2016.