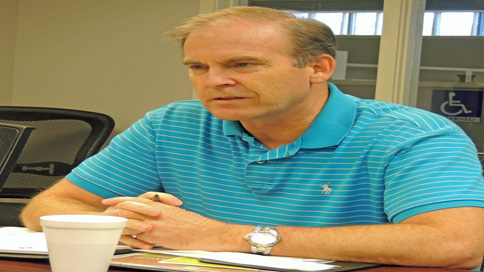 Posted at 21:56h in Volunteers by Charlotte Works Staff

When we ask clients to offer testimonials about their experiences at Charlotte Works, it’s a toss-up between volunteer job-search team leaders Bob DeMers and Howard Ross as to who gets more (both quantity and quality) accolades for being an influential part of team members’ searches.

While their approaches are different, their compassion and genuine desire to see people succeed are just alike.

DeMers, who has a background in counseling, says, “I can draw out of people what’s really going on inside so we can get to the heart of the matter and discuss it.”

He also offers a shared perspective of having been in transition himself at various points in his career: “I was a TV meteorologist. I love weather – as a kid, I used to watch TV weathermen and draw weather maps in the bathtub with cold fronts and all that,” he confesses. “I was working in television and having a mid-life crisis – doing lots of soul-searching in the early 90s. We had a change in management at the station I was working for, and the work environment became extremely dysfunctional. I needed some help with direction and hired a career coach. She was methodical and straightforward in her approach, and in the end, I knew I wanted to go back to grad school and get a master’s degree in counseling.”

He did, and opened a private psychotherapy practice following graduation in 1995. DeMers maintained both jobs for a short period of time before getting out of TV altogether in the late 90s.

“About 10 years into my psychotherapy practice, I was at a place where I wasn’t sure what was next, so I hired a business coach. She was great, very engaging, full of enthusiasm and could spot opportunity a mile away. I got the full breadth and depth of what coaching is all about. For me, the coaching with her was the holy grail that I’d been looking for!” says DeMers. “I thought, ‘I’ve got to have this for myself!’ So I went back to school and got certified as a coach. It completely changed my business and my outlook on life.”

“Charlotte Works provides a wealth of learning opportunities, resources, support, training and networking opportunities that can change your perspective about who you are and how you can fit more meaningfully into the job community.”

Shortly thereafter, DeMers and his family moved from Maine to Charlotte and he established Coaching Works, where he offers a variety of coaching, training and leadership development programs. Half of his business is focused on individuals and the other half is focused on companies.

He was hit as hard as everyone else when the economy tanked in 2008, as his clients and prospects were being laid off and companies cut back on training. A connection of a connection introduced him to Charlotte Works.

“It was so great for me because I could do what I do for free, for folks who were struggling just like me. It was an opportunity to give back,” DeMers says. “I was able to share the best of me. I felt connected with the wonderful folks I was working with, and the fact that it was meaningful to them made it meaningful to me.”

He joined the volunteer ranks as a job-search team and workshop facilitator.

Business began to pick back up for Coaching Works in 2010, and DeMers is quick to credit Charlotte Works for part of that: “It helped me keep my sanity! And although many folks [from the job-search team] have moved on, I’ve stayed in touch with them and had business opportunities as a result of some of the people I’ve worked with.”

Through it all, DeMers says his favorite part of his work here is bringing people into the sunshine of success.

“I love when people are able to get to do what they want. I’m a little outside the box in that I help them get back in the job market, but I really push and knead people’s dough to get them to think about what they really want,” he explains. “I’m like a pig in poop when someone lands, but I really get jazzed when someone says, ‘I’ve decided to start my own business’ or ‘I’ve decided to pursue what I’m most passionate about in my career.’”