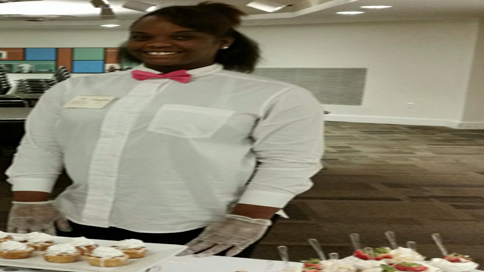 Posted at 21:54h in CARE3 by Charlotte Works Staff

Two million children are sexually exploited worldwide each year, according to the Victims of Trafficking and Violence Protection Act of 2000 (1). Survivor leader Antonia “Neet” Childs is on a mission to equip girls to leave “the life” of sex trafficking and market their minds instead of their bodies.

“Our gifts will keep us out of those situations, but encouragement keeps us going to pursue our dreams,” says Childs, founder and executive director of Market Your Mind, Not Your Body (MYM), one of NCWorks Career Centers’ newest CARE3  (Community Access to Resources that Engage, Empower and Employ) sites.

MYM, the nonprofit extension of Childs’ Neet’s Sweets bakery, serves young women ages 13 to 21 who are at risk for, or have experienced, commercial sexual exploitation and domestic sex trafficking. As a survivor herself, Childs wanted to create a place where girls exiting “the life” could readily plug into resources and get a sense of stability that many of them lack.

“It’s a culture shock for the girls who are coming from no processes to a structured environment,” says Operations Manager Brian Gunter. MYM offers a “drop-in center” as a way to adapt the program to the girls. They can “drop in” to MYM’s training center to receive family counseling, skills development and GED training provided by licensed social workers and educators. They are not required to stay.

“They’re all in crisis so they would come in when they felt comfortable and take care of small things like getting their birth certificates and social security cards. Now they’re saying, ‘I need help getting back into school’ or ‘I need employment,’” he continues. “So to avoid sending them all over the city for these resources, we became a CARE3 site.”

The site averages a referral per week from the Mecklenburg County Department of Social Services (DSS). Being a CARE3 site helps MYM staff move through the court-ordered checklists for each teen.

Although the statistics are daunting – North Carolina is a top-10 state for sex trafficking, according to the Washington Office of Crime Victims Advocacy (2) – Gunter says that stabilizing life after sex trafficking is in a different realm than simply promoting awareness. He notes that many people don’t think about the uphill struggle to get survivors back to normalcy once they’re in DSS custody; MYM commonly serves girls who have been bounced from home to home and have left previous referral programs after only a few days.

How has MYM been able to change the paths for these teens? By listening.

“We spend time just listening to them,” Childs explains. “The girls would say that they were never comfortable in some of their placements, but they are comfortable with us, which makes them want to stay.”

And MYM’s rapport is being recognized.

“I noticed the true compassion and protection for the girls,” says Charlotte Works’ Community Partnerships Manager Debra White. “After meeting Neet and Brian, there was no doubt that this partnership was a given and has become very dear to my heart.”

Some of the teens are also enrolled in Charlotte Works’ Youth Works out-of-school program to help them overcome other barriers to success.

“The girls have access to NCWorks Online, workshops and other resources in a location they’re already comfortable with, which helps them be successful. We can integrate them into other programs when they’re ready,” explains Anna London, youth programs manager at Charlotte Works.

Chandler Bowden discovered her passion for baking as a survivor of domestic minor sex trafficking when she was referred to Market Your Mind. Two years later, she is the head baker at Neet’s Sweets, the bakery started by Market Your Mind Founder and Executive Director Antonia “Neet” Childs. Bowden was the lead caterer for Neet’s Sweets at the Levine Museum of the New South’s “Cuisine with a Conscience” event on Dec. 1.

Twenty-two-year-old Chandler Bowden is one of MYM’s greatest success stories. Two years ago, London introduced Bowden to Childs and Gunter. Bowden is not ready to publicly share her life’s story prior to MYM, but she proudly credits the organization for its role in her accomplishments.

“Last summer, I became a full-time baker’s assistant at Neet’s Sweets and now I’m the head baker,” she says. “It’s very therapeutic for me. It’s helped me get out of the mindset that I have a job and into thinking that I have a career.”

The encouragement she found at MYM helped Bowden to complete her GED last month. She will begin Central Piedmont Community College’s culinary arts program in January.

“She didn’t victimize herself or the things that happened to her,” Childs says. “Having MYM as a CARE3 site helps plug the girls into any career that they want and inspire them to say, ‘if Neet can do it, so can I.’”