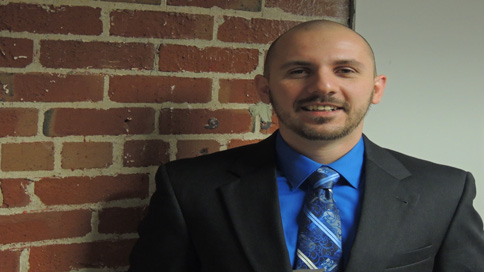 Posted at 17:18h in Success Story by Charlotte Works Staff

Dino Dizdarevic used to be a Navy logistician and a small business owner.

At the end of the month, he’ll be a Wells Fargo home mortgage consultant.

His personal drive and Paul Bill, veteran employment and education specialist at Charlotte Works’ partner Charlotte Bridge Home, are what tie his past, present and future together.

Dizdarevic and his family moved to Charlotte from Hilton Head Island, S.C., where he was last stationed, in March 2015 to be closer to his children here. “Charlotte has been a great place for me,” he says. “I was not expecting to find this level of support – not just as a veteran, but as someone unemployed.”

Navy veteran Dino Dizdarevic worked with Veteran Employment and Education Specialist Paul Bill, a Navy vet himself, at Charlotte Bridge Home to refine his resume, connect with other veterans and learn about job fairs and veterans-only hiring events. He starts a job with Wells Fargo on Jan. 25.

He began looking for work in June. “My first step was creating a LinkedIn account. That was instrumental in my success,” Dizdarevic says. “A lot of vets don’t create LinkedIn accounts because we rely so heavily on our military connections to help us land a government job. But what happens when you move to an area like Charlotte without a military base? You have to network and make local connections. There are vets who have already come there and made the connections. We look out for each other – it’s truly a brotherhood and we help each other out.”

Through his new connections, Dizdarevic learned about and became an active participant in and champion of the Charlotte Veterans Network, a monthly networking group. (The group doesn’t have a website, but interested individuals can search for it on LinkedIn and Facebook.)

It was at a June Network luncheon that he met Bill, who directed him to Charlotte Bridge Home and began to serve as Dizdarevic’s coach and cheerleader. “He really helped me get my resume to what it is now,” says Dizdarevic. “It was four pages, because it was very difficult for me to compress my Navy experience, even though it wasn’t 20 years. [The revised resume] is the one I used and the one that got me the job.”

Dizdarevic joined the Navy at 18 and served for seven years in supply chain management roles. When he left the service in 2008, he worked in government jobs and graduated from the University of South Carolina at Beaufort. In 2013, he quit to work with his wife at the beachside t-shirt shop that she owned.

So when Bill invited him to a veteran-only job fair at Charlotte Motor Speedway and he hit it off with the Wells Fargo mortgage team, he was “out of my comfort zone.” But Wells Fargo actively recruited him, inviting him to visit to see the atmosphere for himself and meet other members of the team. “These are not things that happen all the time. But it ensures the right fit for them and the right fit for me,” Dizdarevic says. “They went out of their way to make sure I was comfortable.”

After he completes a month-long training class, he’ll join a premier team that’s focused on relationship sales to brokers and agents, in addition to homebuyers themselves. One of his future colleagues is another Navy veteran who lived five minutes from Dizdarevic when he was stationed in Norfolk, Va. (They’d never met each other until Dizdarevic’s interview.)

“I’m really excited to join the team at Wells Fargo. There are so many opportunities there, and my team will be expanding. Once I get on board, I don’t plan to go anywhere,” he says.

What he does plan to do, however, is continue to attend the Charlotte Veterans Network luncheons and advocate for the group and Charlotte Bridge Home (Dizdarevic carries Bill’s business cards with him to share with other veterans he meets).

“These resources are not meant to sit idly by,” says Dizdarevic. “If you’re serious about finding a job, use them!”

Are you a veteran who’s looking for work? Register on NCWorks Online to learn more about services available to help – and get advance access to job listings! And contact Veteran Employment and Education Specialists Paul Bill  or Tiann Shade at Charlotte Bridge Home.