Job-seeker writes her own success story 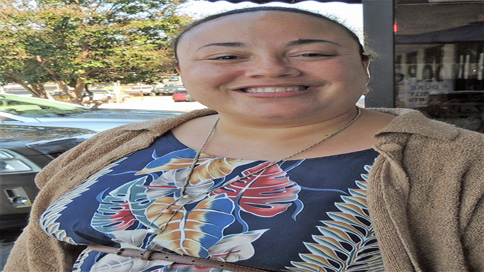 Posted at 18:24h in Success Story by Charlotte Works Staff

Latoya Green embodies the adage, “Don’t judge a book by its cover.” The mother of two battled a substance addiction and homelessness before reaching out to community partners who could help her once she decided to help herself.

Green describes how her life “began to spiral out of control” after she left her payroll processing job at a local financial institution. She was living with her mom, who was bipolar and battling cancer, but the Charlotte native found herself homeless along with her 7-year-old daughter and 2-year-old son when that living arrangement proved to be unstable. To make matters worse, her car was repossessed. Her situation seemed hopeless. Green turned to marijuana to cope with the stress.

“I said, ‘Something has to happen.’ I realized that I had no idea what I was doing,” she says.

In March, she reached out to Urban Ministry Center, which helped her get into a homeless shelter. Unbeknownst to Green, she had to submit a drug test before entering the facility. She was sent to a drug rehabilitation program when they found marijuana in her system.

“You’re supposed to be in the program 45 days. I was there for 75 days and my [test] still wasn’t clean,” she explains. “Technically, they would’ve been able to kick me out.”

Instead, she was referred to Hope Haven, an organization that offers supportive services and shelter to those facing substance abuse, and one of Charlotte Works’s Share Network Access Points (SNAP) sites. She paired up with Resident Services Employment Specialist Wanda Gofoth as part of her job-readiness activities. Green vowed that she would begin to seek guidance from those who “had a piece of the puzzle” she didn’t possess. Goforth was one of those people.

“She was extremely thorough and pushed confidence in me when I thought I lost it,” Green says. “It helped to know that she believed in me.”

Gorforth believes Green’s positive attitude deserves the credit. “LaToya was so excited about the opportunity to be professionally employed again that each time I met with her, her enthusiasm was contagious,” Gorforth shares. “I encourage [clients] to apply for positions of interest and not be the one to cut themselves out of the running.”

Green visited the NCWorks Career Center at West Morehead Street after completing her 90-day job training at Hope Haven. She attended an orientation to learn how the Center could help her job search.

“I’m appreciative of NCWorks because it reminded me that my career path is a choice,” she says. “Often people get stuck in jobs because they feel it’s what they have to do because they’ve been dedicated to it for so long. Something clicked for me during orientation, and I realized that I didn’t have to go back into banking.”

Green considers what happened next to be divine intervention. A week after completing orientation, she went to the McLeod Addictive Disease Center and asked about available positions. She was a clinical psychology major in college and spent six months working in behavioral health, so she had credentials that she could mold for any of the positions. She completed an application and left her resume with the receptionist. She received a call an hour later to come in the next day for an interview. Green’s seven years of banking experience led to a job offer for a position in McLeod’s finance department.

Working at the McLeod Center is a surreal reminder of the life she once lived. She relishes the fact that she can pass by residents and have encouraging words to say.

“This position combines my personal testimony, my banking experience and my clinical psychology background all in one,” she says. “But I’ve realized that I can’t do it all by myself. I’ve tried and I know where it leads. This is like God doing for me what I can’t do for myself.”

Green has been in recovery for nine months. She attends recovery meetings about four times a week. She says that it’s necessary because it allows her to talk about things most people wouldn’t understand, such as the excitement she feels knowing that she can pass a drug test.

“I’ve learned more about myself in eight months than I have in 32 years. I take pride in knowing that I don’t know everything, so I ask myself, ‘What am I going to learn today?’ she shares.

Now that she feels that her career is back on track, Green is focused on buying a car. She travels about an hour on public transportation each day to get to work. Some days she decides to walk to help relieve stress. However, the extra motivation came when her daughter cried and explained that having a car would help get their life back together.

And thanks to the help of Habitat for Humanity, Green is close to becoming a homeowner.

“If you told me 10 years ago that I would have to go through this to get where I’m at today, I wouldn’t have believed you. I felt like life had dealt me a certain deck of cards, and I had to play them out,” Green reveals. “Now I know that’s not true and that’s so empowering! Looking at me, you’d never think this my story, but everyone has a book in them.”