Grateful and hoping to give back

Home › Grateful and hoping to give back 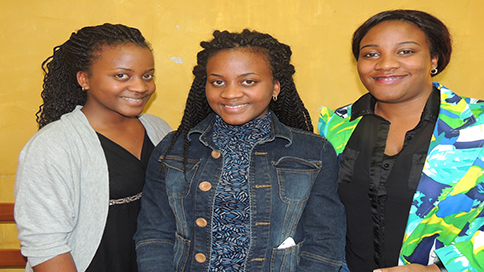 13 Feb Grateful and hoping to give back

Posted at 17:03h in Youth by Charlotte Works Staff

According to the United Nations, there are more than 51 million people living as refugees, the highest number since World War II. These days, conflicts don’t so much resolve as endlessly evolve into new conflicts, and more than 10 percent of those currently displaced have been refugees for years, sometimes decades.

Living in a state of impermanence in countries where they do not have the rights of citizens creates overwhelming barriers to autonomy and a sense of self-worth for those in exile.

The life of the modern-day refugee is different than what most imagine. Rather than living in isolated camps, relying on humanitarian aid, many refugees move to urban areas in their asylum countries, where they hope the opportunities for education and work are better.

Such was the case with Susanne Ndovya, Anna Nguru and Gabriella Mughole. Now in their early 20s, the sisters fled the endless struggles in the Democratic Republic of Congo with their mother for a Ugandan refugee camp more than 10 years ago. When she was able, their mother moved the girls to the Ugandan capital of Kampala.

Although they had registered for resettlement with United Nations High Commissioner for Refugees (UNHCR) when they first reached Uganda, it took more than 10 years for the family to be relocated. With the help of Carolina Refugee Resettlement Agency (CRRA), they were brought to Charlotte.

“The flight to America was so long, it took us almost 24 hours to get here,” recalls Mughole. “Then we waited two hours to be picked up and taken to an empty apartment. We were tired, scared and disappointed; it was not what we expected. Personally, I was ready to go back to Africa, but then we were introduced to a kind lady, Marsha Hirsch, who helped us settle in.”

Hirsch, acting director of CRRA, has worked closely with the sisters since their arrival. “In the first 30 to 90 days of a refugee’s arrival, we set them up in an apartment, get all of their documents together, get them a Social Security card and do health screenings,” she says. “We also do an employment intake: what their education is, what jobs they may have had. Once I met these girls and saw what their capacity was, I thought they would be excellent candidates for ResCare’s Inspire Youth program.”

A youth service provider of Charlotte Works, the Inspire Youth program offers educational and workforce services to youth ages 16 – 21. The sisters entered the program and were assigned a case manager, Paula Holmes.

“I thank Ms. Holmes for always believing in me,” says Ndovya. “She helped me get my GED [General Educational Development] certificate and then got me into CNA [Certified Nurse’s Assistant] school.”

In fact, Holmes navigated all three sisters through GED certification and on to WIA (Workforce Investment Act) -funded CNA training.

The girls’ determination has impressed everyone involved in their progress. “They started the program in June 2014,” says Darnell Middleton, Inspire Youth’s director. “Susanne, Anna and Gabriella obtained their GEDs, participated in work experiences and completed CNA training. They accomplished these goals in six months.”

Nguru sums up her experience with program and the dedicated service professionals she has met: “I believe in education, I want to utilize all the opportunities available for me to go to college and be something in the future. I’ve learned a lot and gotten to know people who inspire me and help me see where I want to be and which path to take.”

All three sisters plan to further their education and each desires a job that will allow her to, as they put it, “give back.” Twins Ndovya and Nguru both plan to enter the international relations field, while big sister Mughole wants a career in healthcare.

“These three girls are motivated and they have great personal drive,” says Hirsch. “The more they do, the more doors open for them.”

Read about a previous success story from these two agencies.