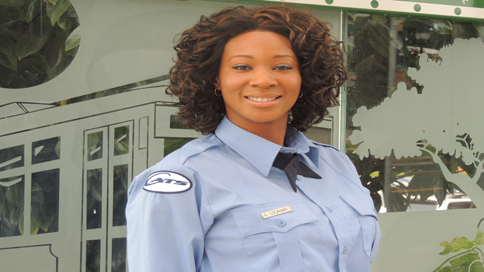 Posted at 14:34h in Success Story by Charlotte Works Staff

When you meet Gia Lockhart, especially if she’s in her CATS (Charlotte Area Transit System) uniform, you see a classy, cheerful woman with sparkling eyes and a wide smile.

What you don’t see is a woman with an eight-page N.C. Division of Motor Vehicles rap sheet that starts with her first ticket at age 12.

This is a story about second chances.

Only you can change you. Don’t let your past dictate your present or your future. It’s your past: let it go. Move on. Leave yourself open for opportunities. There’s always room for second chances for anyone. This is my second chance. Gia Lockhart

Her story begins when she was 12. “I was young and dumb – I didn’t realize driving was a privilege,” she says. Through the years, she accumulated multiple tickets and moving violations, even serving jail time.

She not only found herself with no car and no license, but divorced with two children, both of whom had medical issues as infants and toddlers. “It’s very hard when your means of transportation are a bicycle, a taxi, public transportation, paying people to drive you around. You can’t be dependent on everyone all the time,” says Lockhart. “I owe so much to my uncle, who passed away seven years ago. On his deathbed, he said, ‘the only thing I want you to do is get your driver’s license and keep it.’ I allowed myself to be put in this predicament of no transportation. I had to change myself, my actions, my ways, my thinking.”

In September of 2013, Lockhart met an intake specialist with Charlotte Area Fund when she went to the former South Boulevard JobLink to use the Internet and work on her resume; she learned about a job-training program run by the Fund that offers a stipend upon completion. Now with three children and an income comprised only of minimal child support payments and what she earned bartending part-time, Lockhart jumped at the chance to earn some extra money.

She attended a job-readiness class and gained job-search and money-management skills, and was provided with interview clothes and food and supplies for her infant.

With a background in transportation, acquired as she fulfilled her uncle’s dying wish, she got a job offer from a trucking company; she needed to take a certification class, but didn’t have the $200 fee.

Within a few weeks, she’d been approved to earn her CDL at TransTech’s Charlotte Diesel Driving School. She started taking weekend classes in mid-October and graduated in early January 2014.

“I was the only female. I was the only African American. I was also the oldest at 34, and graduated at the top of my class with a 3.79 GPA [grade point average],” Lockhart says proudly.

Her first job took her up and down the East Coast and around the South. Her family helped with her children, and “I got home on Friday, got everybody situated for the following week and went right back out on Sunday,” she says.

After a couple of months, she put in her notice and returned to Charlotte Works to find a local driving job. On NCWorks Online, she found a paid apprenticeship to train as a dump truck driver; she applied and got the job. It came easy and she enjoyed the work, first doing “dirt runs,” then graduating to stone and asphalt.

“When I drive around the county, I can see my work. It puts a smile on my face and I point out to my kids that I worked on the 485 project, the streetcar project, the Tanger Outlets, resurfacing Rea Road,” says Lockhart.

One day off last May, on a whim she applied at CATS. “I never wanted to become a bus driver, but I wanted something else because if it rains, if it’s too cold, if it’s the day after it rains, you can’t work as a dump-truck driver, and it affected my income,” she says.

When her phone rang in July and a human resources representative from CATS was on the line, “I put my dump truck in park, got out and did my happy dance!”

During the required driving class, CATS’ human resources director met her in the hall one day. “He had my record in his hand and said, ‘I just want to look at the person in front of me while I look at this record. He flipped through every page and kept looking at it and looking at me, back and forth,” remembers Lockhart. “I told him, ‘Everything on that is true. I did it. I realized seven years ago that driving is a privilege. The person who stands in front of you today is not that person.’”

He told her he would hire only four people out of her class of 40; he wanted her to be one of them.

When Lockhart passed the class, she called him. She began training as a bus operator in mid-August and graduated on Oct. 3 with a passenger endorsement added to her license.

“It feels good to be self-sufficient, to be stable, to be a contributing member of society,” she says. “This is not it for me!”