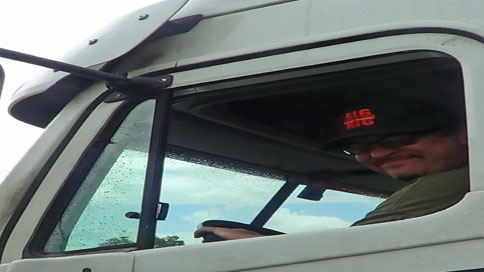 Posted at 18:57h in Success Story by Charlotte Works Staff

“There’s a lot more to truck driving than turning the wheel,” says Jon-Paul Jones, company driver with Schneider National in Charlotte. “If you don’t have your math down, or don’t know how to read a map, you’ll never make it.”

Jones has been driving OTR (over the road) for Schneider since earning his commercial driver’s license at the end of May with the help of WIA (Workforce Investment Act) training funds from Charlotte Works.

He was laid off from an auto parts store after seven years and came to Charlotte Works in January 2013 on the recommendation of a friend who serves as an instructor at TransTech’s Charlotte Diesel Driving School. “He told me about the WIA money and where to go. They’ve had a few students come through WIA, so they were able to tell me how it worked and what I needed to do,” Jones explains. “I went to orientation, scheduled an appointment and it was all downhill from there!”

He worked with Sylvia Jones (no relation), senior training coordinator, and they developed a mutual admiration society. “Jon-Paul was very detailed and enthusiastic,” she says. “Everything I asked of him, he went over and beyond.”

“Sylvia was super-helpful,” says Jones. “I’m full of questions, so I’d send her an email and she’d get right back to me. She set up appointments during my lunch breaks from school and got me processed as quickly as possible. It couldn’t have been easier.”

There’s a national shortage of truck drivers, according to Trucking jobs arrive in Charlotte, but fewer interested (Charlotte Observer, July 8, 2013).

TransTech’s program involves four weeks, or 160 hours, of training. Week one is spent in the classroom, learning Department of Transportation rules and laws and gleaning helpful hints from experienced driver-instructors. Week two sees student drivers in “the yard,” learning how to maneuver the big rigs. The final two weeks finds them on the road actually driving the trucks. Students take the driving test on the final day.

Jones has traveled to Ohio, South Carolina, Florida, Indiana and Illinois. His father was a truck driver and his brothers are diesel mechanics, so he knew the lifestyle he was choosing – and loves it. “If you’re willing to put in the time and do the process right, truck driving has come a long way in terms of technology and benefits and it’s a great-paying job,” he says. “And there are jobs available – more than 140,000 nationwide, I just read. If you put in the time, it can pay off.”