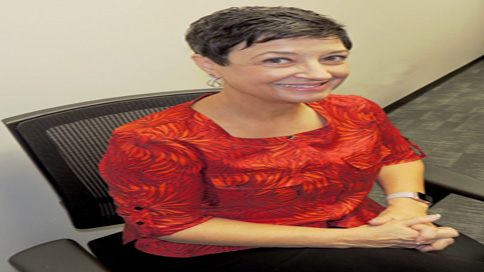 Posted at 16:51h in Success Story by Charlotte Works Staff

When Jodie Anderson left her accountant job at a printing business last summer, she thought it would be no time before she landed her next opportunity. “I thought I knew everything. I really didn’t think my job search would be that big of a deal,” she said.

She knew she needed to be more proactive once unemployment went from days to weeks. In September, Anderson visited NCWorks Career Center at W. Morehead Street (WMS) as a requirement to receive unemployment benefits. She posted her resume on NCWorks Online and set up email alerts for jobs.

“Hindsight is a great thing,” she said. “Looking back, I realized that my parameters were too narrow, which explains why I didn’t get any emails about jobs.”

While attending a Service Corps Of Retired Executives (SCORE) mentoring event, Anderson met volunteer Job-Search Team Leader Howard Ross. “He encouraged me to attend an [NCWorks] orientation, and then I joined his job-search team,” she recalled.

Ross recommended that Anderson get business cards since she was becoming a regular at networking events around town. “He told me, ‘if you’re marketing yourself, you have to have something to hand people,’” she said. “It made perfect sense to me after the fact, but it didn’t occur to me at the time.”

Anderson also took advantage of workshops that addressed elevator speeches and age discrimination to educate herself on some of the barriers she was facing.

She knew that it was important to stay positive. “You have to not sit at home in front of your computer, which is so easy because you’re thinking, ‘I don’t want to go in public or I’m embarrassed and I just want a job,’” she said.

In November, Anderson, confident in her previous experience working with other law firms and her knowledge of QuickBooks software, applied for an accounts manager position at law firm Tillman Wright, which offered her the job a week later. She said her experience at the NCWorks Career Center was valuable because it put her around people who had ideas, but she admits that it took some nudging to get her on track.

“You have to be open to everything that’s offered here. I wasn’t at first. If Howard hadn’t pushed me to come in, I would’ve just kept crawling in my hole at home,” said Anderson.

You can’t help but be inspired by Julie Hill and the positive energy she exudes when she enters a room. Her impact was felt not only by job-seekers who sat in the orientation workshops she led, but also by NCWorks Career Center staff, who felt mixed emotions when they learned that her time as a volunteer was ending because she had accepted a full-time position.

When she moved from St. Louis, Mo., back to Charlotte last March, Hill began researching resources to help her land her next position. She stumbled across NCWorks Career Centers and visited the Forest Point Boulevard (FPB) location.

“It opened up a world full of possibilities at a time when I needed it most,” she said.

Hill worked closely with Career Coach Priscilla Ledbetter, who assisted in starting her job search. When Hill learned that her coach was moving to WMS, she began attending workshops there also. One workshop in particular stood out: Elevator Speech 101, led by Ross.

“That workshop made me say, ‘you don’t really have an elevator speech,’” she said. “I feel like I can talk to people, but to be able to put that most powerful statement before an employer, I wasn’t quite there.”

Although Hill was comfortable speaking among her peers, when it came time to get in front of executives, she described the feeling as a knot in her stomach. Doneisha Wilson, intake specialist (FPB), encouraged Hill to join the Charlotte Works Toastmasters club. The “knot” doesn’t feel as big now that she can see improvements in her public speaking.

With all the guidance and support that she received, Hill, looking for an opportunity to give back, applied for the Volunteers@Works program. She was accepted as a weekly orientation leader at WMS and served for three months.

“I enjoyed that so much and felt honored to be able to give as much information as I could to those who were in need of help,” she said. “We all have pity parties, but we have to pick ourselves up and move forward.”

Whenever Hill speaks to job-seekers, she tells them about NCWorks Career Centers and all the resources available at no cost to them.

“I have been truly blessed to have sharpened my skills and to have met some wonderful people along the way,” she said. “As a result, I became more efficient in online job-searching, writing an impressive cover letter and delivering an elevator speech that captured the attention of my new boss!”

Hill is proof that employers continue to look for qualified candidates even during the holidays: she began her new role at Lending Tree as a facilities and office services manager shortly before Christmas.

Kevin Welch says the breadth of resources he received in the four months he visited NCWorks Career Centers played a big role in landing his job as an operations systems technician at PCI Group.

The 23-year Army veteran had been unemployed since 2013 after being laid off from his position as a print laser operator. He supported himself through home-improvement side jobs. After attending orientation at WMS last May, he connected with Veteran Employment and Education Specialist Tiann Shade at Charlotte Bridge Home (CBH), who revamped his resume and provided job leads.

Wilson referred Welch to the Working Smart: Soft Skills for Workplace Success program, and it opened his eyes to areas that would make him a better job candidate.

“My soft skills were lacking. I had them but never really thought about them because of my military regimen,” Welch said. “The program made me focus a lot on myself and my shortcomings. Moving forward, I can do things better.”

After he graduated the program in August, Welch felt confident as he continued to apply for jobs through NCWorks Online. A few weeks later, PCI Group noticed his resume and invited him to interview for an operations position. It was an opportunity to apply the lessons learned from Working Smart, and he landed the job!

“I’m thankful to the folks at NCWorks Career Center. I tell other people I know who were laid off that they need to come in,” he said.