Career-seeker proves there’s more than one way to success

Posted at 09:49h in Career-Seeker, Community Partners by Shameika Rhymes 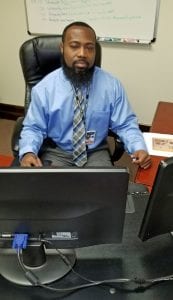 Anthany Watson spent nine years in his upper management human resources position when things came to a screeching halt. After the unexpected change in plans, Watson visited the local NCWorks Career Center* seeking help and says it’s the best thing he could have done. Attending multiple training programs at Central Piedmont Community College (CPCC) helped him get back into the workforce after being laid off.

Although he was armed with an education degree, some graduate school credits and experiences in teaching and human services, Watson knew he needed to do more to make himself marketable if he planned to embark on another career pathway.

“I’m figuring I don’t want to go back into human services. I’ll use the management [experience] that I have because I don’t want to start over from scratch. Going into hotel management, you start from the bottom. Going to the NCWorks Career Center and going through the [Workforce Innovation and Opportunity Act] process made me realize that wasn’t going to be lucrative for me right off. I decided to stay within management, so I started looking into human resources. From there, I enrolled at CPCC in the Human Resources Generalist program. I also wanted to still expand so I doubled it up with project management,” Watson recalled.

Watson thought that his HR and project management certifications would give him leverage in his job search, but he was still having a hard time finding a job.

Watson worked a series of odd jobs while trying to get back on solid ground, including stints with Uber, Hertz, and a valet waste company.

He headed back to the NCWorks Career Center and began working towards a Professional in Human Resources (PHR) certification, but he didn’t pass the test. At the career center, he connected with career advisor Mark Greer who assisted him with getting his Six Sigma Lean Green Belt certification.

“Anthany was severely underemployed and was just looking to take his previous experience and combine it with some training to better his situation,” Greer explained. “He was looking to improve his life, economic status, and career options.”

“I finished the Six Sigma Lean certification because it gives me an open door to manufacturing. I may not have the hands-on experience; but now I have the knowledge of what it is you need to do to get your product done. Backing that with my project management, if you tell me no it’s going to be because you don’t like me, not because I can’t do the job,” Watson said.

After training for two weeks with FEMA, he returned home to the same situation, no job. He was able to pick up shifts working with a roofing company, but FEMA came calling again nearly two months later. While his previous job wouldn’t wait, another employer offered him a chance that he couldn’t pass up.

“The Mecklenburg County ABC Board called that same week, I went in and interviewed, and I told them about the FEMA situation and they said we can work with that,” he shared.

Watson has been working as a Human Resources Generalist with the Mecklenburg County ABC Board since August 2017. In his role, he oversees activities like the selection and interviewing of the part-time sales associates and assists with payroll.

While his journey was a long one with many bumps in the road, he recommends that career-seekers take advantage of the services offered at the career centers.

“The most important thing about this program is that it’s available to you. The resources are out there, they will help you,” he said.

Watson also advises career-seekers that they must be willing to put in the work.

“If you want to change your circumstances, you have to be willing to work for it. It’s not going to fall in your lap. Don’t allow somebody to tell you no, if they tell you no, find out why and figure out how to change that no into a yes.”

Anthany Watson is one of the many success stories representing Charlotte Works’ Careers4All initiative where one of its guiding principles is that all career-seekers have access to education that aligns with employer opportunities. Read the press release announcing Careers4All to learn more.