2013 Outstanding SNAP Site of the Year: Grace-Mar Services, Inc. is taking the lead 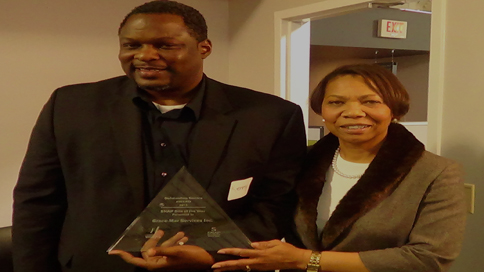 Posted at 19:08h in SNAP Sites by Charlotte Works Staff

“I interviewed with several nonprofits and no one would give me a job,” says Kenny Smith, president and founder of Grace-Mar Services, Inc., describing the organization’s beginnings. “So I said to my wife, ‘I’ll start my own.’”

A career as a top sales professional with GE Capital, American Express and Wells Fargo didn’t allow Smith to pursue his passion to give back to the community. So in February 2009, at the start of the financial collapse, he and his wife founded Grace-Mar Services (named for his wife, Grace, and mother, Margaret) to help individuals save their homes.

What he learned, though, is that housing loss was rooted in job loss. “People were losing their jobs because of employment issues,” Smith says. “They didn’t have a resume, they couldn’t interview, they’d never been laid off.” So Grace-Mar broadened its scope to include job-readiness activities.

Its focus shifted again after Smith attended a Charlotte Housing Authority (CHA) event in 2011. He networked with colleagues from 13 separate job-readiness programs.

“I said, ‘Why do we need a 14th?’” Smith recalls. “I asked all of them, ‘What happens after people finish your program?’ They said, ‘Well, we try to get them jobs.’ I came back and said, ‘Grace-Mar is no longer in the job-readiness business. We’re going to place these people in jobs by developing relationships with employers.’”

In 2012, Grace-Mar moved its offices to the building that houses CHA’s Center for Employment Services, one of Charlotte Works’ original SNAP sites. In 2013, CHA formally transferred management of the site to Grace-Mar, and Smith promptly changed the model, closing the doors to walk-in traffic and transforming it into an employer-driven testing and interview site.

“What drove us was employers and their need to have skilled, tested employees,” he explains. “People who have the skills don’t need four- or six- or eight-week training programs. Let’s send them right to employers.”

And this unique approach is what earned Grace-Mar Services, Inc. the 2013 Triangle Award as Charlotte Works’ Outstanding SNAP Site of the Year.

“Our theme this year was ‘taking the lead,’ and Grace-Mar has done just that,” says Debra Dixon, SNAP manager, citing impressive numbers for the organization, including 582 individual skill-assessment tests administered and a whopping 293 reported job placements.

In the new model, Grace-Mar, in partnership with other community organizations, hosted hundreds of two- to four-hour job-readiness workshops such as resume writing, interview skills, networking and personal branding.

It also provided national certifications for Microsoft Office Suite and customer service, in addition to classes that prepare clients for pre-employment assessments required by employers.

And Grace-Mar often administers those pre-employment skill assessments itself using the ProveIt system, which offers more than 1,500 behavior, software and other skills tests. “Our employers tell us what types of skills they want assessed and what level of scoring they want before we send individuals over to them,” says Smith. “If you score, we submit you directly to the employer.”

The organization also hosts one or two employers such as Target and Convergys onsite for interviews each month. “We concentrate on areas that staffing agencies do not: entry-level positions in data entry, warehouse, call center, catering,” Smith says.

“What I like about Kenny is we both have the same passion for the job-seekers,” says Dixon. “Giving clients the necessary resources that will help them become self-sufficient and employed. Giving them a sense of hope and confidence, and to know that someone really cares about them. Presenting opportunities. Kenny has made a major impact on our community in providing employment opportunities.”

“For me personally, winning the SNAP Site of the Year was a very humbling experience. When you put so much into something and it bears fruit, it’s rewarding. It’s also pressure, because we’ve got to raise the bar,” Smith says. “It’s a great award for Grace-Mar – it validates us and gives us more credibility as a young organization.”

Visit Charlotte Works’ main website for a complete list of SNAP sites, 30 locations throughout Mecklenburg County that are equipped with computers and trained volunteers to help clients become employable and find work.